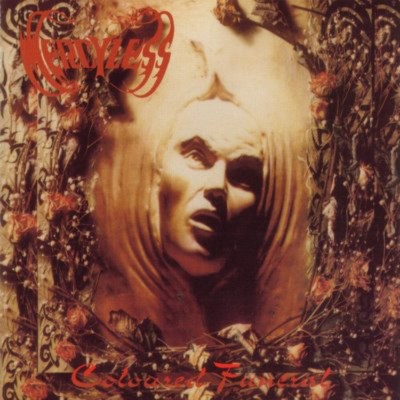 Reissue of MERCYLESS‘ 1993 second full-length, “Coloured Funeral” along with “Spiral of Flowers 2017“, a brand new single by the band.

After their mind-blowing debut, “Abject Offerings” released in 1992 through Vinyl Solution (BOLT THROWER, CANCER, MACABRE…), MERCYLESS signed to Century Media (ASPHYX, GRAVE, UNLEASHED…) and released their second full-length, “Coloured Funeral“, keeping all of previous album’s brutality, heaviness, catchiness and melodies, but pushing it all to the next level with more intricate riffing and song-structures and an overall darker and more mature feel to it making this release not only an other highlight of the band’s discography but also a classic of the whole Death Metal genre, quickly followed by countless tours and gigs with DEATH, GRAVE, TIAMAT, UNLEASHED and many more.

CD2: Live in Memory of Agrazabeth.

After the roar of the horde sharpening its weapons for yet a new battle against everything holy with the unleashing of the Altered Divination digital single in June, this time it's war! Pathetic Divinity, the sixth studio full-length by kvlt Death Metal act MERCYLESS is here and will prove that even after 30 years, they're still one of the unholy Death Metal kings they've always been!