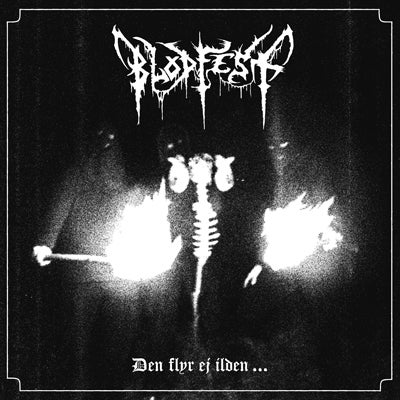 Violent Danish Black Metal.
The 2009 album on vinyl for the first time.
Comes in a silk screened sleeve with insert.If one were to point out a style of Black Metal that is uniquely danish, the sound emited by the Order of the Nonagram, and namely its most active and acclaimed band Blodfest, would be the most suiting. The deadly combination of ancient nordic atmosphere with the aggression of a War Metal act, has yet to be bettered by anyone, and nowhere is it stronger than on Blodfest’s fourth album “Den flyr ej ilden...”  “Den flyr ej ilden..” shows a musical ingenuety seldom seen in music as extreme as Blodfest: chaotic but deadly accurate rythmic variation, explorative yet still cavernous production with the occasional use of envigorating melody.