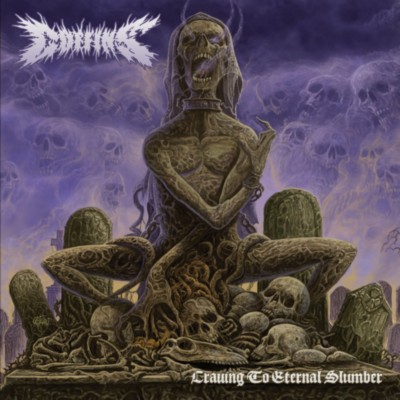 On this CD-EP Tokyo Japan's Coffins are firmly established as the underground's leading purveyors of Neanderthal paced Doomed Death Metal. Previous albums "The Other Side Of Blasphemy", "The Fleshland" and the classic "Buried Death" introduced Coffins' black tar dirge to an audience eager for slowpressive maniac riffs and songs dragged forth like the arms of a lumbering ape with the impact of a huge bulldozer... no escape! Derivative and true rather then progressive and new, with an effectiveness unmatched in today's underground. Rather than toy with forced "evolution" Coffins has instead sharpened and honed it's evolved sound further in its primitive singlemindedness, no compromise here! For fans of: Asphyx, Hellhammer, Autopsy, Grave, Carnage, Nihilist, Celtic Frost, Winter, Slaughter, Massacre.

COFFINS
The Other Side of Blasphemy + bonus