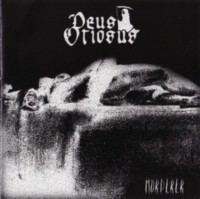 Deus Otiosus release their first studio album, not counting a (live) demo and split with Hideous Invasion, six years after they were spawned. The artwork, inlay and booklet of 'Murderer' are all somewhat gloomy and desolate. Bang on it appears, because musically, these five Danes also deliver a rather dark, mean and desolate blend of death metal, mixed with the sound and atmosphere of sombre, rancid black metal. They manage to do so without losing aggression or bogging down into lugubrious, spun out soundscapes. No, Deus Otiosus prefers keeping it simple, uptempo and gritty and the Danes do this just fine. They should go with the 'keep it simple' idea a bit more even, because the odd solo on 'Murderer' does not add much. A decent bit of straightforward blackened death, all in all.
(www.lordsofmetal.nl)