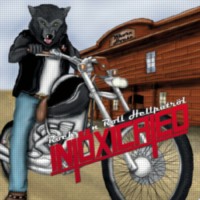 Living up to their moniker and the album title, Intöxicated on their debut presents a nice, rock ‘n’ roll influenced style of speed/thrash metal, with the band proudly wearing their influences on their sleeves. Right from the start the Motörhead influences are rather clear in the swagger that the band clearly displays in their music, and the attitude that is shown along with the music that is meant to be played loud and proud, the way rock ‘n’ roll is supposed to be done. It certainly helps that Louie’s vocals sound like a more gruff/semi-growled version of Lemmy. At the same time, the band takes a more thrashy direction over here, and the intense speed that the band likes to take easily reminds one of early Teutonic giants such as Destruction. The riffing styles of El Rancho further brings about comparisons with Japanese black/thrash legends Sabbat and drunken bastards Abigail, or the more crusty efforts of Joel Grind like in his Tiger Junkies project, especially on the riffing style on songs such as Metal Porno Slut.