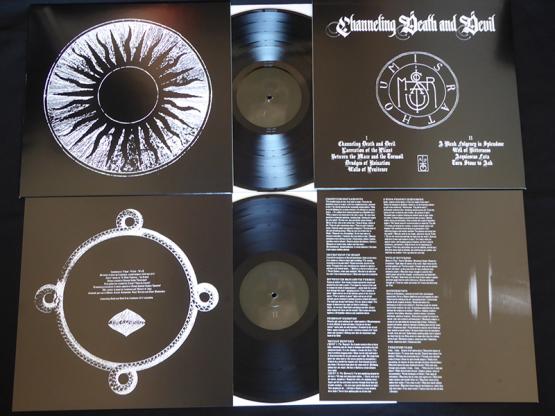 Deep rooted in the infamous Portuguese Black Metal scene, Israthoum re-emerged on Dutch soil in the late 90's to pursuit their devilish quest, continuously refining their essence in a regular flow of releases during the last 17 years.
Keeping the sonority true to their 90´s origins, the band’s first manifestations are influenced by some experimental styles, where keyboards played a prominent role in creating those intense and grasping ambiances. These experiments became scarcer over time and completely disappeared in Black Poison and Shared Wounds,Israthoum’s second album and a turning point on their commitment to the ravaging and harsh resonances of black metal.
Five years after the release of their second full-length, and after having released a split 7”EP and a MCD, Israthoum are back with 48 minutes of pure malignant devastation. Following the path of their most recent work, Channeling Death & Devilpresents an evolution of the riff’s rawness that guide us in a frenzy of unexpected turns.
Opening the door to a twisted, phantomly world, each one of these 9 hymns takes us through an inner voyage between raged and rampant guitar lines, that struck you with the intensity of a lightning, and mid-paced sections of introspective melodies. A dense sound production that drags the listener to an awaken slumber state of mind, hypnotized and mystery induced.
The vocals are a mix of restrained, strangled shouts that nearly break in despair as the turmoil arises. This audial facade carries also the gleam of choirs in a profound interpretation, blazing the atmosphere with an almost conspicuous obscurity, an invocation of things untold but understandable within.
Israthoum are presenting us with their most obscure work, a vessel to all the darkness that let the disquietude unfold…

"Three years after the fantastic "Black Poison and Shared Wounds" ISRATHOUM returns! The trio of VxInfr, Arvath and W.uR delivers a wicked and poisonous audial assault with a new MLP record, entitled "Antru Kald". Originally started as a conceptual project as far back as 1998, it is only now - 17 years later - revealed and unleashed upon mankind. It represents all that defines ISRATHOUM: it adheres to the roots, but doesn't let itself be entangled in the vines, instead developing and evolving upon them into a formation, that is unlike anything else in the scene. This conceptual piece was recorded over several years, with help from Mories of black industrial movement GNAW THEIR TONGUES, who is also responsible for the cover art. The mastering was once again done by Kark of DØDSENGEL.