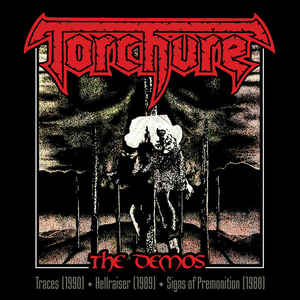 German death metal band TORCHURE was formed in 1985. After 3 demo tapes they released two albums on the German metal label 1MF Records. In 1992 they released one of the strongest German death metals albums ever: ?Beyond The Veil?. The double CD ?The Demos? contains all their early recordings prior to that debut album. This releases features the demo?s ?Traces? (1991), ?Hellraiser? (1990) and ?Signs of Permonition? (1988) and the ?Live in Essen Zeche? (1992) recordings. The 32 page booklet contains a massive interview with the bandmembers from the debut demo and their final demo and has many rare old pictures, flyers and posters. All tracks are carefully remastered. Booklet design by ACW (Pestilence, Chemical Breath, Phlebotomized).