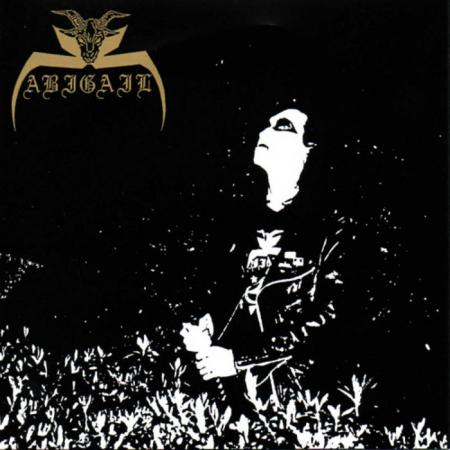 BACK IN STOCK ON GREEN VINYL!!! The relationship between Abigail and NWN! goes back to the 2002 vinyl release of the band’s first album, “Intercourse and Lust.” Since that time, Abigail and NWN! have each mutated into different beasts; however, the relationship between these two forces has remained intact through the years. To honor the nearly 20 year legacy of Abigail, NWN! is proud to present this vinyl collection of some of the band’s earliest work. Along with pioneers Sabbat and Sigh, Abigail have long been recognized as among the most influential Black Metal bands to have emerged from beneath the banner of the Rising Sun. While, in recent years, Abigail has shifted its focus to a more depraved blackened thrash sound, the early work presented on this LP is pure Black Metal played in a manner that is harsh and hostile. This LP opens with the five Abigail tracks featured on the band’s 1995 split CD with Funeral Winds. This material, which has never before been released on vinyl, displays the characteristic wickedness that permeates all of Abigail’s work. These tracks are not merely excursions in sound, however. Each song stands out on its own and the work as a whole evinces a sophisticated level of composition and production. Side B of this LP contains the tracks from Abigail’s first two EP releases. Nearly impossible to find now, “Descending from a Blackened Sky” and “Confound Eternal” contain some of Abigail’s most powerful and blackened revelations. The 1993 “Descending from a Blackened Sky” EP, executed entirely by Yasuyuki, is a magnificent breath of annihilation. Guided by furious and relentless blast beats, Yasuyuki’s style on this EP is more harsh and raw than most of Abigail’s other work. Yet, as with all Abigail recordings, amid the chaos there are well-crafted riffs and song structures that draw the listener deep into the demonic frenzy of the songs.

Abigail has been a staple in the roster of Nuclear War Now! since its earliest days nearly twenty years ago. In addition to multiple albums and EPs, the label released a collection of early EPs and the band’s contribution to a split, entitled “The Lord of Satan.” Now NWN! and Abigail conspire once again to further proliferate the spread of the band’s earliest material with the release of “Blasphemy Night.” This collection, presented on vinyl LP format, includes both “Demo 1” from 1992 and the “Blasphemy Night” demo from 1993. These tracks document the band’s original sound, which is best characterized as an unpolished, abrasive variety of black metal, in contrast to the sharper, more thrash-oriented sort that has resulted from the band’s evolution. As such, it is an essential addition to any Abigail fan’s collection and, more generally, to anyone who celebrates the true spirit of black metal.