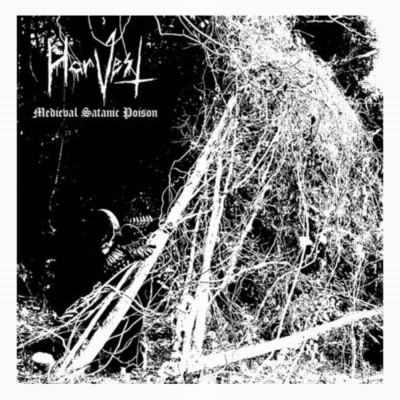 Since before its birth the vile rot that is Harvest, was given its death sentence.
Its fate was sealed in 2013 with the album "Forgotten Vampyres of the Melancholic Night", since then it has been forgotten by many, just like the vampyres of old who once ruled under the moon & stars...
However, sometimes the dead don't remain in the dirt, sometimes the scratching on the coffin lid can't be ignored.
Now once again poisoning the wellspring of life... Harvest is reborn with this album of Medieval Satanic Poison!

Since before its birth, the vile poison that is Harvest was given its death sentence, after 2 demos and a split with Atra, its fate has been sealed with this final opus!
This album is the final decaying resting place of this rotten, hateful and melancholic Australian Black Metal entity.
Limited to 500!

HARVEST
Bend Thy Knee & Present Thy Throat to....