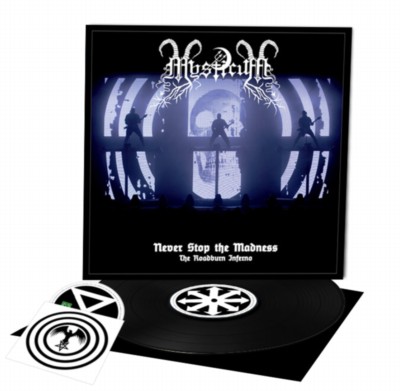 The pioneering industrial black metal force to emerge in the early 1990s, Mysticum brought to the world a completely unique brand of extreme and Psychedelic discordant Black Metal with insane drum machine patterns and synths.

They were originally signed to Mayhem guitarist Euronymous' Deathlike Silence Productions label. However, this venture was cut short following his death, forcing Mysticum to look elsewhere for the release of their eventual debut album and genre classic, In the Streams of Inferno (1996). A perfect concoction of cold, primitive Black Metal and forward-thinking ideas, Mysticum has had a lasting and profound impact on many since the 1990s, so when the long-talked about follow-up album, Planet Satan, surfaced in 2014, these godfathers of the scene rightly returned to reclaim their throne.

In light of the release, Mysticum decided that a return to the stage would be the next logical step, but it had to be done their way, without compromise; and so, with Herr General Cerastes, Dr Best and Svartravn stood upon three 3 metre high podiums surrounded by screens, with one of the most intense light and sound spectacles witnessed at an Extreme Metal show, Mysticum stunned the crowd into submission.

MYSTICUM
In the streams of inferno - reissue

This edition of 'In the Streams of Inferno' also includes a bonus DVD containing two live shows from 1996. 'Grotten', in Asker, Norway has until now been totally unknown to the masses except for the few that were present at the show. The other show is the more well-known Bradford, UK set from Mysticum's European tour with Marduk and Gehenna. Overall both gigs give a great glimpse into the pure atmosphere and intensity of this cult act. It is a must for all fans.

MYSTICUM
In the streams of inferno

For this release, the album has now had some extensive remastering work courtesy of Tom Kvålsvoll at Strype Studios in Oslo to give a better representation of the sound the band initially intended, & includes 2 bonus songs. The packaging also contains new artwork made in close association with the band to fully reflect their intended vision, plus liner notes.

MYSTICUM
Lost masters of the universe