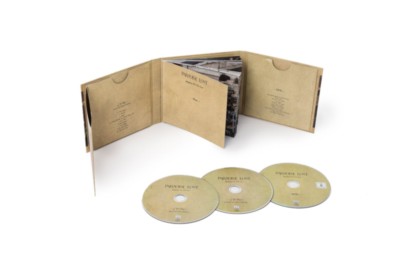 PARADISE LOST
Symphony for the Lost

PARADISE LOST present all their classics recorded live at The Ancient Roman Theatre of Philippopolis in Plovdiv, Bulgaria featuring the Orchestra of State Opera Plovdiv and Rodna Pesen Choir. Vocalist Nick Holmes states: "We have recorded elements of orchestration many times in the studio over the last two decades, as many of our songs lend themselves well to classical arrangement. However, we have never before had the chance to play with a real orchestra in a live situation, so it was very exciting to have the opportunity to play with the Plovdiv Philharmonic and doing that in such a prestigious location as the Roman theatre." Orchestrated by conductor Levon Manukyan, who already has given the classical treatment to works by Marilyn Manson, Alice Cooper, Nirvana, Judas Priest, and many more as well as collaborating with Tarja Turunen (ex-Nightwish) and other prestigious soloists, “Symphony For The Lost” not only presents classic and current PARADISE LOST songs in an astonishing musical fashion, but also an impressive visual setting.

All tracks found on this compilation are rarities from the recording sessions for the band’s recent and much-lauded albums for Century Media Records from “In Requiem” up to last year’s “Tragic Idol”. As new tracks this compilation also presents a brand-new song entitled “Loneliness Remains” and the re-recordings “Gothic 2013” and “Our Saviour 2013”. Accompanied by individual track comments, this is a fantastic collection of rare gems every PARADISE LOST fan should call his own!

On March 16th, Britain's cult metallers PARADISE LOST will release a remastered version of their legendary seventh studio album, »Host«, and a first-ever pressing of the songs on vinyl.
Originally released in 1999, »Host« earned PARADISE LOST their reputation as West Yorkshire's musical chameleon, as it saw the band moving further away from their previous death metal roots to a melancholic and catchier electropop sound.