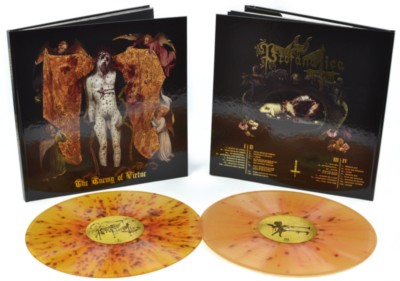 PROFANATICA
The Enemy of Virtue - Ltd

Pressed on traditional black vinyl and beer colored vinyl with heavy oxblood and bronze splatter. Comes in a 16-page hardcover bound book (much like ARCHGOAT's The Aeon Of The Angelslaying Darkness) with gold foil print and UV spot gloss.

On the 11th anniversary of its original release, HELLS HEADBANGERS is proud to present a long-overdue reissue of PROFANATICA's The Enemy of Virtue as a deluxe double LP and double CD. This new edition of the already-staggering The Enemy of Virtue adds PROFANATICA's songs from the Trampling the Holy Faith four-way split album in 2008 - regarded by many as some of the band's best songs ever.

Their 2007 debut album now re-issued as a GOLD DISC in a noble digipak with a bonus live disc from 1991 & 1992.
Their highly anticipated debut full length studio album from 2007 now re-issued a decade later! One of the most influential and original godfathers of extreme Black Metal. Spilling holy blood with 10 ruthlessly scourging Profanatica signature style hymns, Profanatitas De Domonatia is a continuation from where the black cult vanished in 1992.

Their 2010 album now re-issued as a GOLD DISC in a noble digipak with a bonus live disc from 1992. Also includes "Once Removed Savior (Disease Infested Cunts Of Dead Nuns)," previously only available on the vinyl LP.

PROFANATICA
The Curling Flame of Blasphemy

Forever the iconoclasts, PROFANATICA are both black metal legends and defiant of such concepts of "legendary." As one of earliest American black metal bands, during the dark 'n' bloody days of the early 1990s, PROFANATICA set out upon a course of utter blasphemy and barbaric primitivism, then retreated into the shadows as a cult icon, only to be resurrected years later once the black metal scene had finally caught up with their invention/degradation.
Now, with The Curling Flame of Blasphemy, PROFANATICA have gone back to the beginning while re-imagining their signature sound in the subtlest and yet somehow-most-powerful way.

PROFANATICA
Altar of the Virgin Whore

A brand-new mini-album from the legendary PROFANATICA

One of the first wave of American black metal bands, PROFANATICA have purveyed primeval blasphemy on nigh for three decades. 'Rotting Incarnation of God' vomits forth a most vulgar strain of black metal ejaculate. Led by founder Paul Ledney, the trio desecrate everything sacred with a ferocious stream of chainsaw guitars and relentless battery. PROFANATICA’s latest chapter is nothing short of blasphemous perversions, sacrilegious incantations, and furious, unrelenting black metal. The kings of USBM are back to bless you with another assault of unholy hellfire.