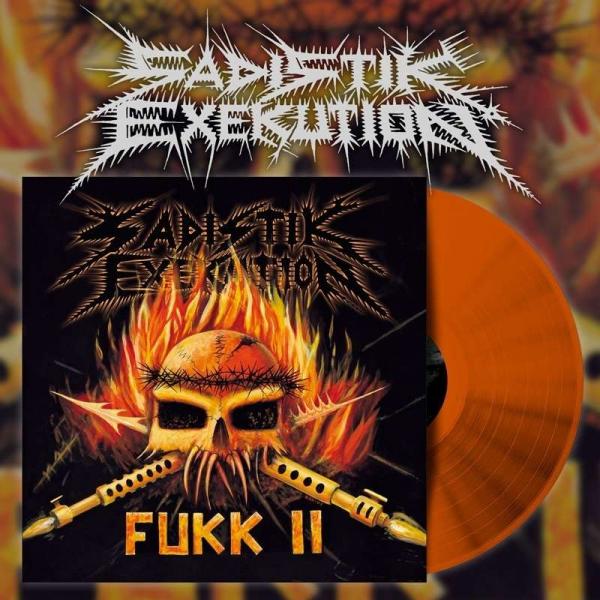 At long last, OSMOSE PRODUCTIONS reissues SADISTIK EXEKUTION's Fukk II on vinyl LP format!
SADISTIK EXEKUTION need no introduction: for nearly two decades, these Aussie barbarians tortured eardrums worldwide with their unique ‘n' uncompromising sound, which minced together death metal, black metal, thrash, and grindcore into something quite legendary and, frankly, never seen since. Although they shuffled off this mortal coil in 2004, the discography they left behind speaks for itself and sounds fresher than ever.
Originally released in 2004, Fukk II saw SADISTIK EXEKUTION continuing the vortextural violence of its namesake predecessor Fukk and further refining that attack – if “refinement” ever existed in their world! Indeed it didn't, or else it took on a strange, sickly form, for this second excursion into the world of Fukk battered and bruised with even more immediacy and same cold ‘n' mechanistic recording style. One could successfully argue that Fukk II was perhaps SADISTIK EXEKUTION at their most overtly METAL – rough and rowdy, of course, but headbanging as if this was the last party in Hell. And alas, it was...
SADISTIK EXEKUTION may be RIP, but their disgusting ghost continues to ruin your day with this reissue of Fukk II!

Reprint, 286x transparent red with heavy black and blue splatter 12" (180g) in a black poly-lined innerbag, gatefold full-color on 350g with glossy lamination, all assembled in a PVC overbag.