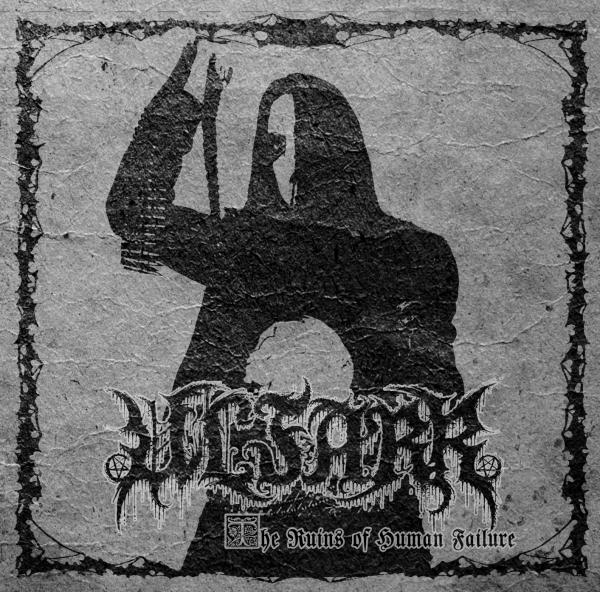 ULFARR
The Ruins of Human Failure

Since 2011, ÚLFARR have stood for uncompromising, antisocial UK black metal - or, under their own banner of Cumbrian Black Metal. Helmed by Dominus, AKA Hrafn - who counts the equally prolific THY DYING LIGHT amongst his activities, as well as fellow labelmates NEFARIOUS DUSK and MORTE LUNE - ÚLFARR released a couple demos its first few years and then a split album with comrades Hrafnblóð. Another demo followed in 2014, followed by, uniquely, two live albums. Then, in 2019 did the band's debut mini-album at last arrive, bearing the all-too-fitting title Hate & Terror - The Rise Of Pure Evil. Swift and scything, ÚLFARR stoked the flames of traditional black metal in the vein of classic Craft, Darkthrone, Mayhem, One Head One Tail, and Death Cult.

Now, after two more years of silence, ÚLFARR return to stoke those flames again with The Ruins of Human Failure. Another apt title, The Ruins of Human Failure encompasses a four-part title track that spits venom and vitriol for miles around, dumping further fuel on the bonfire of humanity. No more and no less, ÚLFARR hold tight to their sound and hone in one dark, dismal energies inspired by the desolate landscapes of their homeland, the unrelentingly bleak climate, and a shared disdain towards humanity in the overpopulated wastelands of modern Britain. At times more primitive than its predecessor and more headbanging at others, you don't so much as listen to The Ruins of Human Failure as FEEL it - and it still hates you, too.

Traditional black metal in the vein of classic Darkthrone, Mayhem, One Head One Tail and Death Cult.