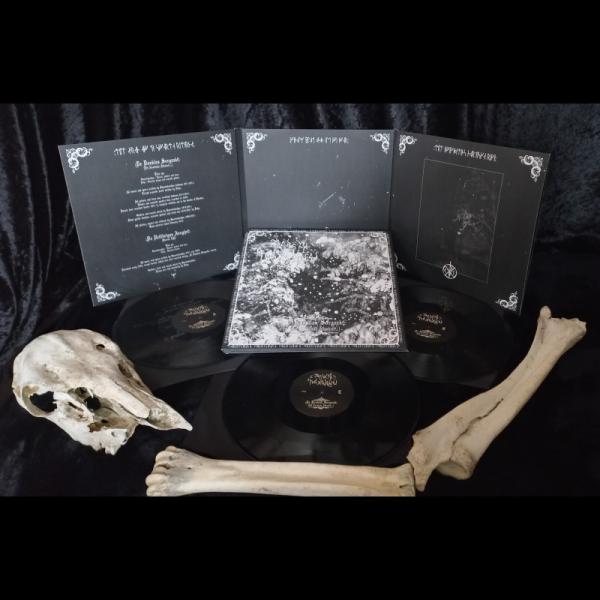 
The release of "De Dunkla Herrarna" was delayed for over a year because Lik tried to strangle Svartedöden causing the band to be put on halt.

Written and recorded in a handful of days, the four epic, emotive songs on offer pass the 47-minute mark
There are a lot of dreamy, expansive, spacey, cosmic passages included
atmospheric Black Metal.
There’s a lot of melody at work and blastbeats are totally eschewed
in favour of slow- to mid-paced observations backboned by drums that genuinely sound like
they were recorded in an ice cave.
This record is mysterious, authentic, ancient yet ageless cold, cold, cold BM magic from the darkest shores of Sweden.

CD re-release of the first demo

One of the most imposing and revered bands in black metal's underground for the past decade, BEKËTH NEXËHMÜ have built a literally towering body of work. The band is yet another creative vehicle of Ancient Records linchpin Swartadauþuz (Azelisassath, Digerdöden, Gnipahålan, Musmahhu, Mystik, Summum, Trolldom, Daudadagr, as well as current labelmates GREVE and MUVITIUM), but it's largely BEKËTH NEXËHMÜ where the man has most built his legacy. To date, three official albums have been released - 2010's de dunkla herrarna, 2019's De fördolda klangorna, and last year's literally massive De Fornas Likgaldrar double-album, which featured over two hours of re-recorded material, recast as a whole new experience - and a literal bounty of demos, each one arguably greater and grander than most band's actual albums, that have equally put a frightening new(er) face on Swedish black metal, by turns becoming the nowadays face of the form.